Mas Unsy    22:24    Bahasa Inggris , Skripsi    Comment
A. Background of Study
Language is an essential aspect in human life, it is a means of communication that people use to ask for and give information. Communication is the key of the language and, without communication listening or reading can not be implemented. Dechant states that Reading takes place only when the child shares to convey (Dechant, 1982: 38). As we know that most knowledge which is taught in Indonesia is from book improving the Teaching of Reading it is the important source of learning. The statement shows that reading and writing activity is very important. Writing began at the time when man learned how to communicate his taught and feelings by means of visible signs. Gelb said that understand able not only for him self but also to all other person. (Gelb, 1951: 11)
Writing is one of the most difficult subjects (www. Indoskripsi.com). we know that the mastery of writing skill of the junior high school graduate is commonly not good. Although they have learned English for three years, but they still face some difficulties in writing, so when they continue their study to the higher level they cannot write well. (Sabarti, 1988: 1) states that students low with writing ability is caused by low level of their ability in elementary, junior high school. And in the other sentence she said that in facing writing assignment many students regard it as difficult subject. The assumption occurs because writing activity consumes abundant power, time and close attention.
Writing is not a natural skill because one cannot acquire this ability automatically and easily. This skill differs from other skills like speaking and listening in which the two other skills can be gained through natural process.
To acquire writing ability the students should get sufficient writing practices. These practices are supposed to stimulate the student’s skill in writing and expressing thoughts in a good passage. Without practice, it is impossible to write well and effectively.
Writing is really important for the students in the case that they should
Make a daily note from their teacher; make a research report, assignment from the teacher. It is also a means that demonstrate to the teacher that the students have acquired the information. Good writing is necessary for success in college. If they do not master writing skill, they will find difficulties to share their teacher or their friends in a written form.
Writing is a chance to communicate the thought in the most affective way possible just to carry out the written. (Warriner, 1977: 332). Sometimes teacher forgot that students have an ability in writing, but they do not aware.They just explain in the teaching material without practice to write something to improve students’ ability.
The writer is interested in studying the writing creativity from personal experiences. The writer wants to do the research in SLTP NU SURUH of the second grade in the academic year of 2011-2012.

B. The Limitation of The Study
There are various kinds of writing learn by the students in the English subject. But the writer will limit the research in writing creativity made by the students’ of second grade at SLTP NU SURUH in the academic years 2011-2012

C. The Problem Statement of The Study
D. TheObjective of The Study
E. The Benefit of The Study
1. Theoretically
This study will give additional contribution to the students and lectures. They will know about writing to their learning process.

2. Practically
a.  This study will add the literature for the reader to discover the ideas for writing
b.  The readers are able to increase writing creativity which included the personal experiences.

F. Literature Review
Writing is considered as a serious matter by the student, because their ability in writing will help them in understanding the opinion they send to the readers. Writing is not only a matter of writing quickly and makes some paragraph to be a story. A good writing is a good arrangement of ideas and grammar.
There are some researches that have discussed about writing. Description on Titik Nurrohmah’s research with the title IS “DESCRIPTIVE ANALYSIS OF WRITING COMPOSITION FROM THE IDEAS TO THE PARAGRAPH “STAIN Salatiga years 2003.The result of research, there are several ways in discovering ideas, what do the students know from their experience and other experience is being the idea to write compotition, and there are another sources and information for discovering ideas, such as, the people’s opinions about particular subject giving evidence. A good paragraph develops only one main idea. In the following paragraph, the main idea or topic is stated in the first sentence. All of them are supporting sentences that follow the topic sentence and it must support the topic sentence. The last is called the concluding sentence. In writing paragraph, some one has to know about unity and coherence.
The second review related to this research the tittle is “STUDENT’S ABILITY IN WRITING SYNOPSIS “(Aji Agus Salim, Salatiga 2003) in this thesis he analyze about synopsis writing.
The third review related to this research is “THE INFLUENCE OF READING INTENSITY TOWARD WRITING SKILL“that has been researched by Ibnu Mas’ud in 2008 the student of state Islamic studies institute (STAIN) Salatiga. His research is case study of the third year students of SMP N 1 Grabag Magelang. In his thesis, He concerned of reading intensity of the third year student dealing with student’s writing skill and the student’s reading intensity to the student’s writing skill.
The fourth review related to this research is “THE EFFECTIVENESS OF ERROR CORRECTION FEEDBACK IN IMPROVING THE WRITING SKILL” by Laila Fitriyani in 2006 STAIN Salatiga. Her research is case study of the second year student of MTS N Slawi Tegal. She was concerned at the finding effectiveness of the teacher’s errors correction feedback on the student’s writing task. The effectiveness of error correction is focused on the improvements of student’s writing skill.
The fifth review related to this research is “THE INFLUENCE OF STUDENT’S READING COMPREHENSION TOWARD THEIR WRITING SKILL MASTERY” by Didik Mahmud Marji’in in 2008 STAIN Salatiga. His research is case study of the second year student’s of MTS Aswaja Tengaran. His research focused in the students’ reading comprehension and the writing skill mastery of the second student year

G. The Definition of Key Terms
To make this research easy and understandable in deeper discussion about the title, the writer wants to explain the meaning of the title at a glance.
Writing
Means is (a) letter or other symbols (e.g. ideographs) on a surface especially with a pen or pencil or paper, (b) put down (a paper) by means of word. (Hornby, 1987: 996)
Personal Experiences
It means private individual of a particular person experience.
a.  Process of gaining knowledge or skill by doing and seeing things.
b.  Event that affects one in some way.( Hornby, 1987: 625 )
Creativity
Having power to create of creation useful and work. (ibid, 669)
Increase
a.  Growth, amount by which
b.  Make or become greater in size, number, degree ,etc. (ibid, 201)

H. APPROACH
The use of discussion is involving the determining object of the study and analyzing the data. This research will be implemented to the second year Student of SLTP NU Suruh in the academic year 2011 / 2012. The writer expects to have quantitative data and the result is presented by using statistic formula.
The methodology that is used in this research is as follow:

I.  The Methodology of Research
The research is action research. According to (Elliot, 1991: 24) action research is concerned with social practice, aimed towards improvement, a cyclical process, persued by sistematic enquiry, a reflective process, determined by the practitioners.
Kemmis and Mc Taggart (2006: 22) stated that action research is series of reflective spirals consisting of four components: planning, acting, observing, and reflecting. The cycle is move to new and revise plan with action, observation, and further reflection. The writer used two cycles in this action research.

J. The Procedure of the Research
This study used classroom action research, so in this case the writer used some steps. There are two cycle in this action research in each cycle, the procedures are as follows:
Planning
The activities the planning is:
Action
Observation
Observation is one of the instruments used in collecting the data. Observation can be systematically used to observe and note the phenomena investigated like the students feeling, thingking and something they do in teaching learning process. Plan this observation fixable and writes something that happened in this classroom.
Reflection
The result of observation is analyzed to remember what happened that has been written in observation. Reflection seeks to make sense of process. Problems and real issues in strategic action. It looks account of comprehend issues, and circumstances in which they arose. Reflection has an evaluative aspect if asks the writer to weight the experience, to judge whetter effects were desirable, and suggest ways of procceding.

K.  Data Analysis
In analysis the data writer uses a formula a follow: 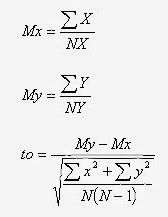 Credit :
Copyright © 2011 - Alfiyatul Khasanah : "The Use of Student’s Personal Experiences to Increase Writing Narrative Text (A Classroom Action Research in The Second Year of SLTP NU Suruh in The Academic Year 2011- 2012)".